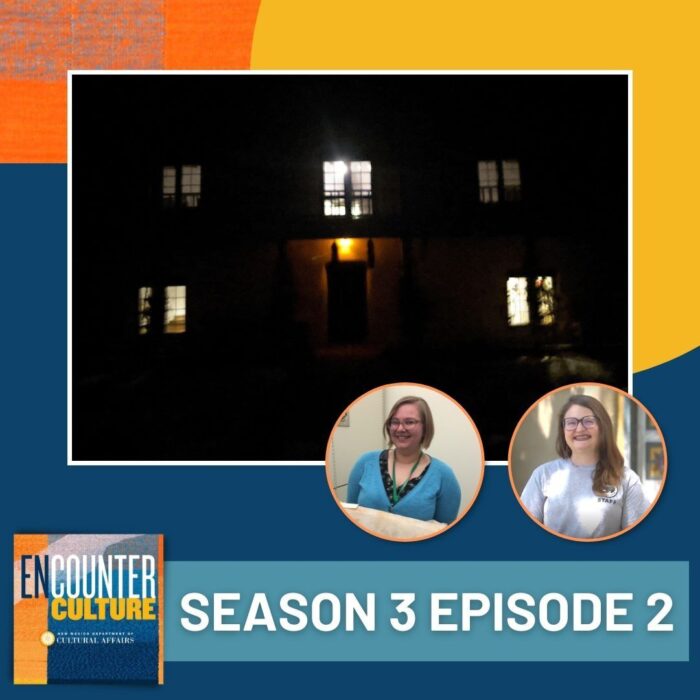 What Have the Trees Seen? New Mexico Folklore at Los Luceros Historic Site with Carly Stewart and Rebecca Ward

October may reign supreme as the spookiest season, but ghosts roam the picturesque grounds of Los Luceros all year round––or so say Carly Stewart, Site Manager, and Rebecca Ward, Instructional Coordinator, of the culturally significant and geographically secluded property. In part one, Encounter Culture host Charlotte Jusinski and her guests introduced audiences to the epic history of New Mexico’s newest historic site. In part two, the trio invites curious minds to set aside plausible explanations in favor of a “spirited” trip around Los Luceros’ atmospheric acreage.

“Folklore is such an important part of New Mexico history with La Llorona and ghost stories and all these kinds of creatures that exist,” says Carly as a preamble to her own tales of otherworldly encounters at Los Luceros, including heavy windows mysteriously opening on their own and broken clocks suddenly ticking the time. It’s worth mentioning that due to its out-of-the-way location, ten miles north of Española off Highway 68, full-time staffers live on the grounds. “This [spookiness] is part of the culture, part of the history because so many community members have experienced really weird things happening on the site, including us,” she admits.

As if its isolated location weren’t enough to lend Los Luceros some seriously spirited street cred, the sprawling compound was home to many big personalities. Carly and Rebecca agree that it’s impossible not to feel their presence reverberating throughout the Territorial-style hacienda, the Victorian cottage, or the river house. Even Los Luceros’ 18th-century capilla (or chapel) hums with disembodied voices, possibly those of two lovers buried within its adobe walls.

Haunted though it may be, Rebecca’s quick to point out that Los Luceros and its invisible inhabitants are welcoming. “I always try to emphasize to people [that] I’ve never felt anything in the hacienda that made me like, it’s spooky or creepy. I’ve never felt like it’s malicious or malevolent or anything like that.” Instead, Los Luceros beckons guests to explore its lush landscape alongside the Rio Grande. And, maybe, engage with one of its many historical spirits.

Learn more about this fascinating historical site and plan your visit at Los Luceros. Dawn-til-dusk days are the first Sunday of every month.

“At Los Luceros specifically, ghost stories have become a part of our folklore because when the site was closed at night, unoccupied, in certain times through history, it was falling apart; it was seen as this huge two-story haunted house.”

“We do think that it is a really important part of the site’s history and culture to interpret and to make an experience, and a lot of people come to Los Luceros because of the haunted stories and the ghosts.”

MENTIONED IN THIS EPISODE

Visit http://newmexicoculture.org for info about our museums, historic sites, virtual tours and more.