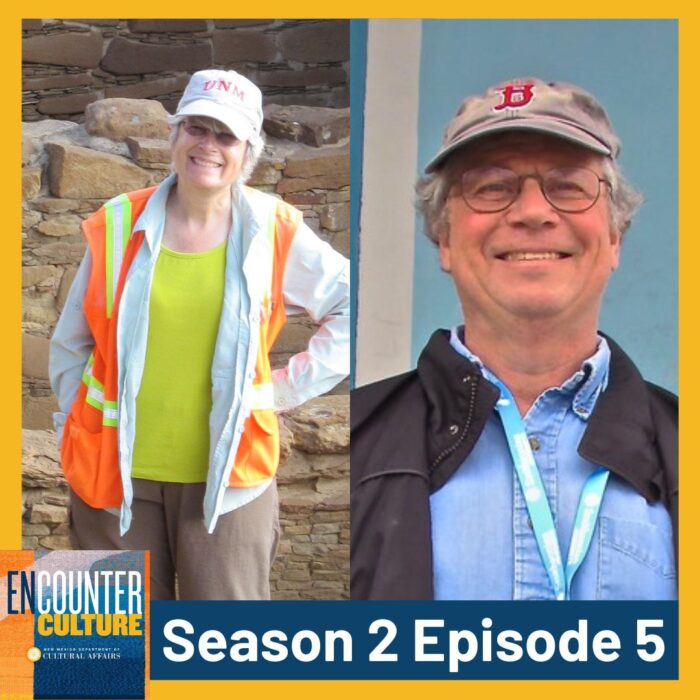 All Roads Lead to Chocolate: Origins of Cacao in Chaco Canyon with Dr. Patricia Crown and Jay Shapiro

Is there a food more universally loved than chocolate? No other ingredient lends itself to savory, sweet, and even alcoholic applications, tempting folks in everything from molten cakes to moles to Martinis.

Chocolate—or, more specifically, cacao—has been processed and consumed in Mesoamerica for millennia. In Chocolate: The Exhibition, which opens on June 17 at the New Mexico Museum of Natural History and Science and is brought to us from Chicago’s Field Museum, audiences are invited to explore chocolate’s worldwide significance and learn how it spread to all corners of the human experience.

Encounter Culture host Charlotte Jusinski takes the local angle. She and her guests delve into the Ancestral Puebloan’s connection to the non-native cacao bean, charting its arrival and usage by way of the unique cylindrical jars discovered at Chaco Canyon––with renowned scholar Dr. Patricia Crown and retired archaeologist Jay Shapiro.

Chocolate at Chaco Canyon is a mystery that remained hidden in plain sight for decades until Dr. Crown began piecing the clues together, starting with the uniquely decorated jars stored among artifacts at the Museum of Northern Arizona. “I wasn’t sure why I was so interested,” she recalls, but the intrigue prompted her to consult a colleague who specialized in similar pottery found in Mayan civilization. When told that the Mayans drank cacao from the cylindrical vessels, Patricia assumed her colleague had conducted organic residue studies to reach that conclusion. Instead, her colleague had simply read the hieroglyphics. “It says: this jar is used for drinking chocolate,” laughs Patricia.

So how did drinking chocolate end up in Chaco Canyon, a locale inhospitable to the cultivation of the cacao tree? Three possibilities pique the professionals’ curiosity: people from the south traveled north with cacao; people from the north ventured south, then returned with cacao; or cacao moving from hand to hand, village to village, eventually reaching Chaco Canyon.

“That’s the conundrum with archeology. We don’t know everything,” admits Jay. “We know some things, and some things may simply not be discernible from the archeological record, and how cacao got to Chaco may, unfortunately, be one of those things.”

Even without a definitive origins story, it’s fascinating to imagine native civilizations throughout the Southwest encountering cacao for the first time, then adopting drinking chocolate for use in their ceremonies, as a therapeutic medicine, and even as a form of liquid courage.

Chocolate: The Exhibition opens on June 17 at the New Mexico Museum of Natural History and Science.

Visit http://newmexicoculture.org for info about our museums, historic sites, virtual tours and more.