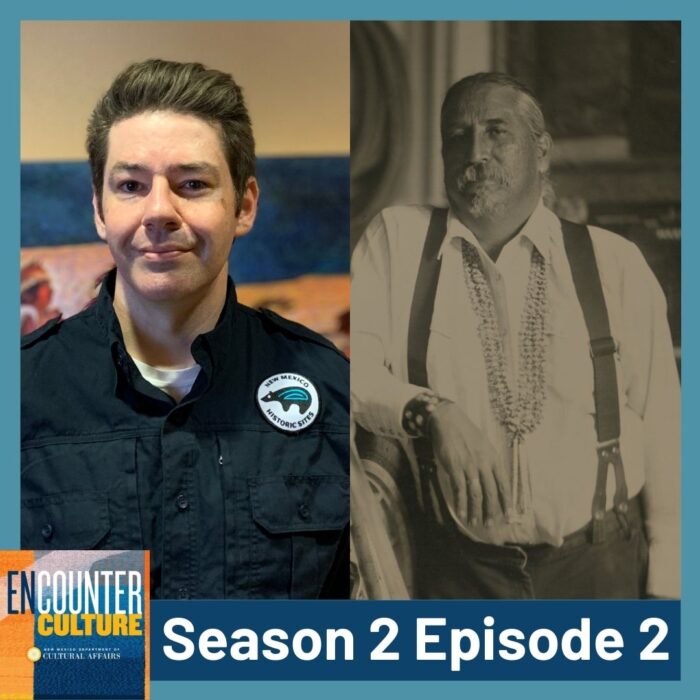 #10: Listen, and Speak the Truth: Collaborating Through Conversation on the Bosque Redondo Memorial with Manuelito Wheeler and Aaron Roth

Conversations worth having never come easy. Perhaps that’s why previous attempts to present a complete history of the Bosque Redondo Indian Reservation, an inhospitable million-acre concentration camp into which thousands of Navajo and Mescalero Apache people were forcibly relocated by the US government in the1860s, fell short. The primarily white cohort of state employees who initially created those exhibitions did so without input from Indigenous partners––the people whose ancestors suffered brutal mistreatment on The Long Walk and cultural genocide at Fort Sumner.

Although Fort Sumner Historic Site was established on the grounds of Bosque Redondo in 1971, it’s taken half a century to develop an exhibit that properly represents the history of this region. Or as properly as it can for now. Encounter Culture host Charlotte Jusinski speaks with Aaron Roth, historic site manager, Fort Sumner Historic Site, and Manuelito Wheeler, director of the Navajo Nation Museum in Window Rock, AZ, about Bosque Redondo: A Place Of Suffering, A Place Of Survival on the eve of its grand opening in May 2022. The trio discuss Bosque Redondo’s tragic past, the impetus for reimagining its memorial, and amplifying tribal voices as a matter of authentic historical record.

“I came onto this project knowing the broad strokes of history,” says Aaron, “but you don’t necessarily learn how it impacted people or continues to impact people today. That’s something that you have to learn through experience.” For this permanent installation, the exhibit team created an environment in which visitors can form a deeper emotional connection with the Navajo and Mescalero people––two groups that the US government had identified as “problematic” in the 1800s during its drive to settle the West––so as to understand better the devastating effects of the 300+ mile death march and traumatic camp internment that followed.

“This is a super sensitive subject for Navajo people, and it’s an important subject for Navajo people,” Manny says. Rethinking Bosque Redondo presented an opportunity for the museum to truly engage with the area’s difficult history, presenting a narrative that challenges non-confrontational whitewashed versions. “That’s probably one of the biggest issues with Native history throughout this whole country and continent: the non-Natives didn’t listen. We had things to say and points to make.”

By combining multimedia storytelling with spaces that invite reflection, the interpretive exhibit seeks to promote more inclusive and, yes, difficult conversations going forward.
Bosque Redondo: A Place Of Suffering, A Place Of Survival opens on May 28, 2022.