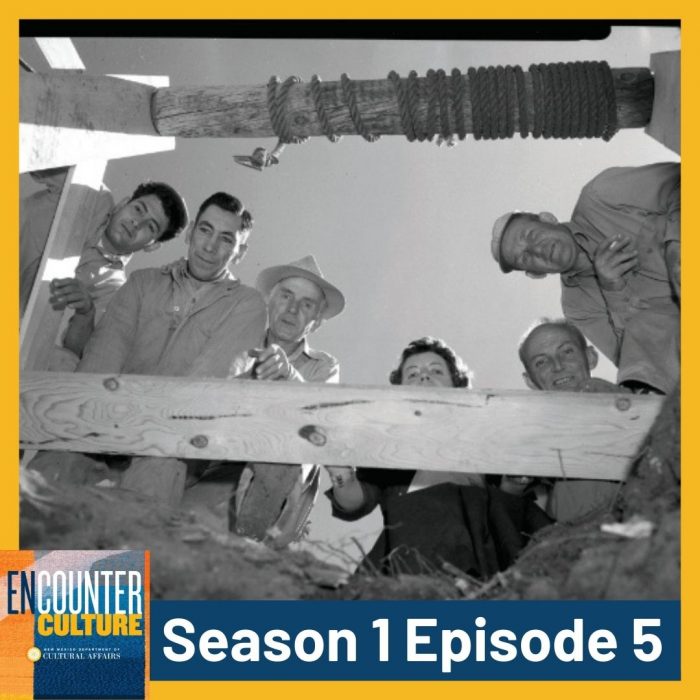 If Santa Fe held an election to decide the city’s official meme, “I rebuilt the Palace of the Governors at my own expense” would surely garner a hefty number of votes. Various governors––Spanish, Mexican, and American––over the last 400 years have uttered versions of that phrase, highlighting their individual efforts to remodel and repair the oldest public building in Santa Fe.

Governor grandstanding aside, visitors expecting a gilded European-style building are often let down when they encounter the single-story adobe structure for the first time. But as host Charlotte Jusinski learns, the iconic landmark houses an archival treasure trove both above and below ground. She’s joined by Cordelia Snow and Stephen Post, the guest curators of The Palace Seen and Unseen: A Convergence of History and Archaeology, the new long-term exhibit at the New Mexico History Museum. The trio digs into four centuries of Palace history, exploring stories revealed in excavated artifacts and anticipating mysteries not yet uncovered.

“Depending on whom you ask, the Palace of the Governors is perhaps one of the most important, if not the most important, building in New Mexico in a lot of ways.” Cordelia, or Dedie as she’s known, doesn’t make that claim lightly. From that day in 1974, when she first set foot inside, Dedie immediately fell in love with the Palace and down its archeological rabbit hole. “It was, for a historic archaeologist, an absolute dream of a place to work,” she says, adding, “I had no more idea of what was going on where the archaeology was like Alice in Wonderland.”

While Dedie concentrated on the history hidden beneath the Palace floorboards, Stephen focused on the possibilities buried outside its walls. He began his career at the Palace in 1978, carefully sifting through the fine, sandy soil in search of historic bits and pieces. A lot has changed over the last 40 years, and Stephen’s hopeful that modern techniques will positively impact archaeology’s future. “I think in the future, we’ll do a better job of being more careful about how the buried deposits and the remains left by past peoples will be treated,” he says, “so that we don’t unnecessarily disturb aspects of the past that could be there, should really be there, for another 400 years.”

The Palace Seen and Unseen is an intentionally titled exhibit. It reminds us that this historic site continuously reveals itself to us, inviting present-day visitors to connect with those from 400 years ago in the same magnificent space.